Welcome to Bluebell House Guesthouse, My name is Barbara Martin and I have lived around the Windsor area for over 30 years.

My husband Tim and I purchased Bluebell House 13 years ago as the location is beautiful and because it is close to both Windsor and Ascot.

There are local restaurants, events and things to do listed on our web site but if you are planning to visit the area soon or perhaps you’ve been here before but wanted to stay longer because you felt you’d missed out, or maybe you’ve visited all the usual tourist destinations and you’re wanting to find something different this time?

I can help you.

Many of our guests who come just for one night while passing through say they wish they could stay longer when they realised just how much there is to see and do in and around Windsor.

As I said I have been living here for around 30 years and have lots of good ideas on what to do and see.

As our guest here at Blubell House you can tap into that valuable information.

Just Click Here and I will send you a FREE COPY

This is the original Crispin Coach House now Bluebell House. 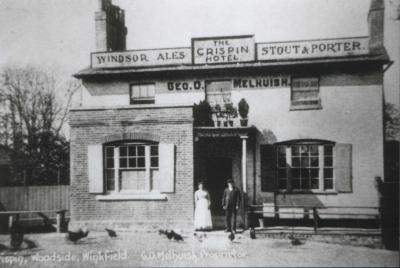 In 1887 John Baker is listed as mine host offering ‘good accommodation for beanfeasts, tea parties and travellers’. In 1894 there was a transfer of tenancy from John Baker to William Jones.

Oxley’s Directory of 1925 lists Mrs. Maude Thompson as the landlady. From 1927 – 1929 Henry Albert Harris took over the tenancy.

The building stopped being a public house in 1931 when Courage sold it as a private dwelling. The original beer cellars and pantry remained in the basement until 1998 when the previous owners reclaimed them as living areas.

The present owners, Barbara and Timothy Martin bought the Guest House in May 2006 and have made significant improvement since that time.

The house name was changed to Bluebell House in 2000, named after the bluebells which grow on the bank outside the Windsor Room every May.